Throughout history, there are so many stories about people leaving home to find their way…seeking something more than what they’ve always known. There are also many stories of those same people coming home…realizing that they already knew exactly where they belonged. Ron Elkus and Rod Brown of The Shirt Box in Farmington Hills, MI, fit that description perfectly.

This fall, The Shirt Box will celebrate 35 years in business. It’s a momentous occasion for a business that almost never happened. In 1981 Ron Elkus had just graduated from Michigan State University with a degree in labor relations. He was offered a position at Marshall Fields in Chicago…at a generous salary of $10,000 per year. He thought that was pretty fabulous, but when he crunched the numbers, he realized that he would have to borrow money every single month, just to “get by”.

Since that wasn’t a smart option, Ron started looking around for something else to do. Someone approached him about opening up his own small business…and The Shirt Box was born. The store began with a modest 600 square foot space, selling shirts and ties, and has since blossomed into a different retail location with over 3,100 square feet selling everything from the original shirts and ties to sportswear, suiting and many accessories.

Business partner Rod Brown’s path followed a similar route. Rod actually worked for Ron when he was in high school, and he loved it. Retail seemed to just come naturally to him. After high school, Rod went to college and became an attorney—searching for his own place in the world. After a time, however, he came back full circle to what he really loved—retail—and once again working for, then with, his former boss Ron.

Ron shares that without a doubt, the thing that’s changed the most since 1981 is the mix of clothing they offer, and the growth of casualwear. It used to be that the clothing collection was made up of 80% shirts and ties. “There used to be casual Fridays, meaning that everyone needed business suits and clothing for the rest of the week”, Ron told us. With the advent of casualwear, Ron estimates that their business is 65-75% sportswear, and only about 35% in dress. “It’s rare that a customer wears suits and ties everywhere. Instead, everyday is casual Friday.” 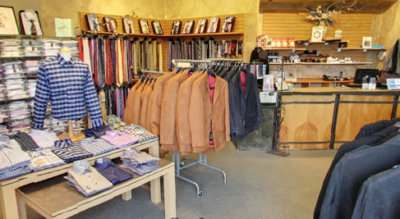 Online shopping is another big change for the store since 1981. “Small, independent stores like us, we’re dinosaurs”, says Ron. But there’s one thing that keeps customers returning to the store, and that’s the relationships. “It’s nice to sell clothes”, Ron shared, “but it’s our relationships with our customers that keeps them coming back.” In many cases, they are on their second generation customer.

Great service to their customers is just one way that the folks at The Shirt Box give to their community. This is one business that truly understands what it means to give back, as philanthropy is a cornerstone of their business. Ron and Rod have participated in service to their community in so many ways over the years, from design contests to all kinds of “drives” and donations; they believe in serving the community that has become their home. Two events were especially memorable for them. The first was, understandably, a clothing drive. The Neighborhood Service Organization in Detroit was looking for clothing for people in need of a helping hand, or people getting back into the workforce. The clothing drive that The Shirt Box led was so successful, the organization was able to open up the giving to a larger group of people—an incredibly satisfying and humbling experience.

Similarly, Ron and Rod also participated in a drive called “Back Alley Bikes” – an opportunity to give bikes to children in underserved areas. They even included education on how to care for and maintain the bike. Because the store is in such an accessible, suburban area, The Shirt Box was able to collect over 200 bikes for this effort—a tremendous success!

Those are just two examples of the many times Ron and Rod have reached out to help their community. “It’s one thing to be successful, it’s more important to give back”, says Ron.

Ron’s awareness of people’s needs helps define the goods that the store carries. He’s sensitive to the fact that everyone, regardless of size, just wants to feel good about what they are wearing. That’s why they carry clothing in a wide variety of styles, price points, and sizes, offering clothing up to a 5XL. “We focus on treating people the way we want to be treated”, Ron tells us. “We’re the ‘Cheers’ of men’s retail”. St. Croix Sales Representative, Rick Hencier, would agree: “I always have a blast when we work together on a new collection.  I haven’t met anyone who enjoys what they do more than Ron and Rod. They have such a wonderful passion for the business.”

We think that with a business philosophy that includes: giving back, treating people with respect and focusing on the relationship—Ron, Rod and the full team at The Shirt Box have a happy, successful future ahead of them!

Please visit The Shirt Box when you are in Farmington Hills, MI.