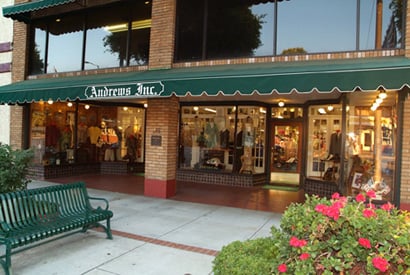 Gary Andrews is a lifetime resident born and raised in Glendora.  Early on, Gary’s dad worked as a forest ranger and then moved into the real estate business, spending twenty years with Ken Turner.  His mother worked her entire career for the school district and served two terms on the School Board.  In 1980, Gary’s parents were named Co-Citizens of the Year by the City of Glendora.

While serving in the National Guard, Gary attended California Polytechnic University, graduating with a Bachelor of Science degree. After college, Gary went to work for a local retailer on Glendora Ave in the heart of the village area.  After several years, he decided to it was time to start his own retail business establishing, Andrews, Inc. in 1972.  Later on, Gary met his lovely wife Connie Hill. They married in 1981 and have one married daughter, Jennifer Andrews Charles.

Together, Gary and Connie have created one of the finest traditional clothier stores in the San Gabriel Valley.  Celebrating over 41 years, they are always looking for new ways to better serve their customers.  At Andrews, Inc. they pride themselves in offering the very best in custom tailoring. Their unique Made-To-Measure programs ensures the best fit and look possible.

The Andrews have been long time supporters of the Glendora Village District area. Gary chairs the Business Improvement District (BID) Advisory Board for the City of Glendora and is one of the driving forces behind efforts to market and promote the village district.