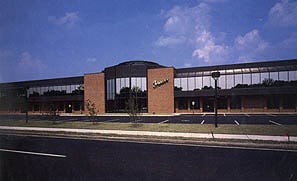 The first Franco’s store was located on Dumbarton Avenue in the Lakeside area of Richmond, just north of the city limits.  By 1976, the business had outgrown the tiny store, and Franco built a new building on Lakeside Avenue, just a few blocks south of his first store.  Word spread throughout Richmond, and Franco’s expanded into ready-made clothing.  Expert, on-site alterations and attentive service quickly became the trademarks of Franco and his staff.   After women’s items were introduced in 1980, a new addition was built.  In October 1985, Franco’s celebrated the grand opening of its complete facility on Lakeside Avenue, with its marble-floored rotunda modeled loosely after the Galleria in Milan, Italy.

Franco’s has also had smaller stores in various locations around Richmond.

All the while, Franco, Mark and Kevin have remained committed to keeping service as the highest priority. The friendly, family atmosphere is due in part to the family members in the business. Their history is just beginning.